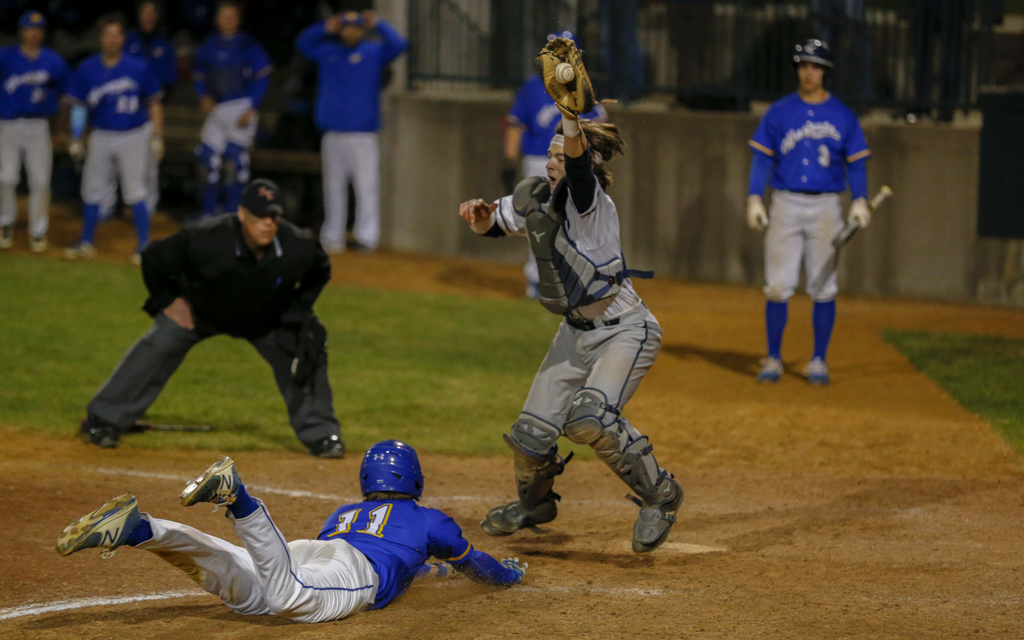 Wayzata's Casey Stowe scores on Keegan Nickel's base hit in the top of the 10th inning to give the Trojans a 2-1 lead over Chanhassen Thursday night. The Trojans would go on to defeat the Storm 5-3. Photo by Jeff Lawler, SportsEngine 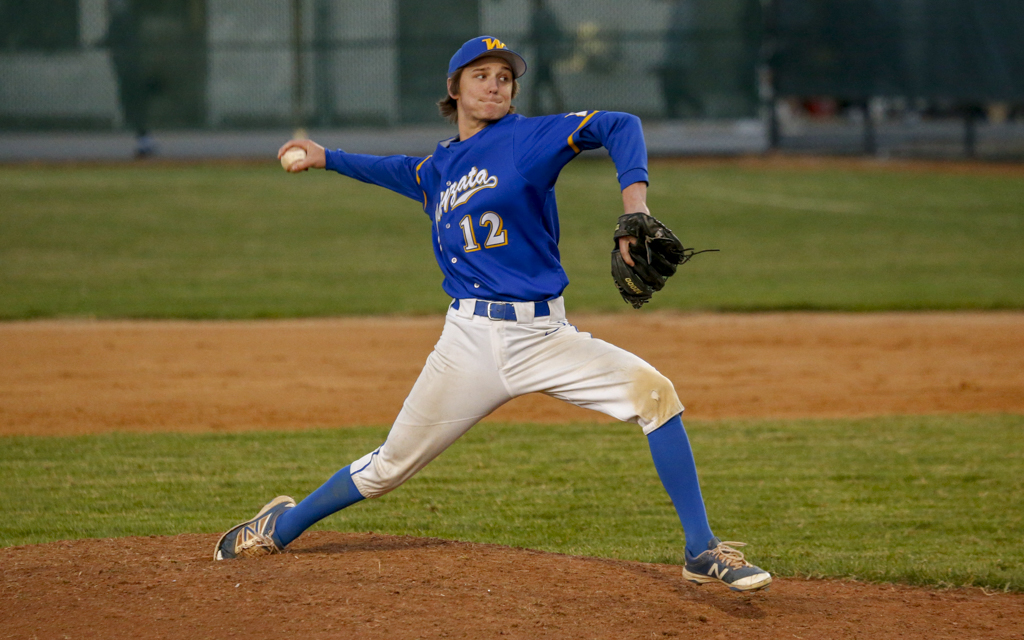 Usually, when a team doesn’t get a hit until the 10th inning, they don’t win. When they finish the game with only two hits, they don’t score five runs. Luckily for Wayzata, Thursday was far from a usual baseball game.

There’s an adage that says, “You see something new every time you watch a baseball game.” That could not have been more true after Chanhassen junior pitcher Jacob Mrosko threw seven hitless innings, which would be the biggest story of 99 out of 100 games. Unfortunately for Mrosko, he had to settle for a no-decision, as the Trojans (6-2, 3-0) picked up a 10-inning 5-3 win off Storm relief pitchers.

“This felt like a playoff game. Beyond the win or the loss, there was a lot riding on this for both teams,” Wayzata coach Bobby DeWitt said. “Both teams came out looking to prove something to themselves, I’d say both teams did, we were just fortunate to get a few extra more than they did.”

The Trojans got their first hit of the game by way of Casey Stowe. He was sent to second on a sacrifice bunt, then Cullen Stamp was intentionally walked to set up a possible double play. This brought up Keegan Nickel, who was in the exact position he was hoping for.

“That’s the moment I want to be in, that’s everyone’s dream, they want to go up there with the game on the line ready to make a play,” he said.

Nickel hit a fastball to the opposite field to drive in Stowe and give the Trojans all of the momentum. They plated three more runs, and the energy at Storm Field was completely wiped out. A few fans left after enduring nine and a half brutally dramatic innings, assuming this one was done.

It looked like they made the right decision, as the Storm (5-5, 4-0) got two quick outs. Chanhassen was able to load the bases, which allowed Jack Nemetz to hit a two-RBI double to make things interesting, but the rally came up short.

“The best part for me is seeing them not give up, ‘cause it’s easy for teams to just put their head down and be done when some adversity happens,” Chanhassen coach Ross VanHauen said.

While Nickel made the play of the game, the unsung heroes of this game were the two pitchers who each battled for seven innings.

First, there was Mrosko, who despite some walks and errors, was able to pitch seven hitless innings with eight strikeouts and one unearned run.

“He pitched his heart out there,” VanHauen said.

Then there was Ben Leuthner, who came into the game in the fourth inning. It was the second appearance of the season for Leuthner, and it came two weeks after his first appearance of the season. Two to three innings of work would have sufficed, but he threw seven innings and picked up the win. He allowed two runs and four walks but racked up eight strikeouts in the winning performance.

“He threw a ton of strikes tonight and forced them to put the ball in play. He chewed out a lot of innings for us, and it was needed,” DeWitt said. 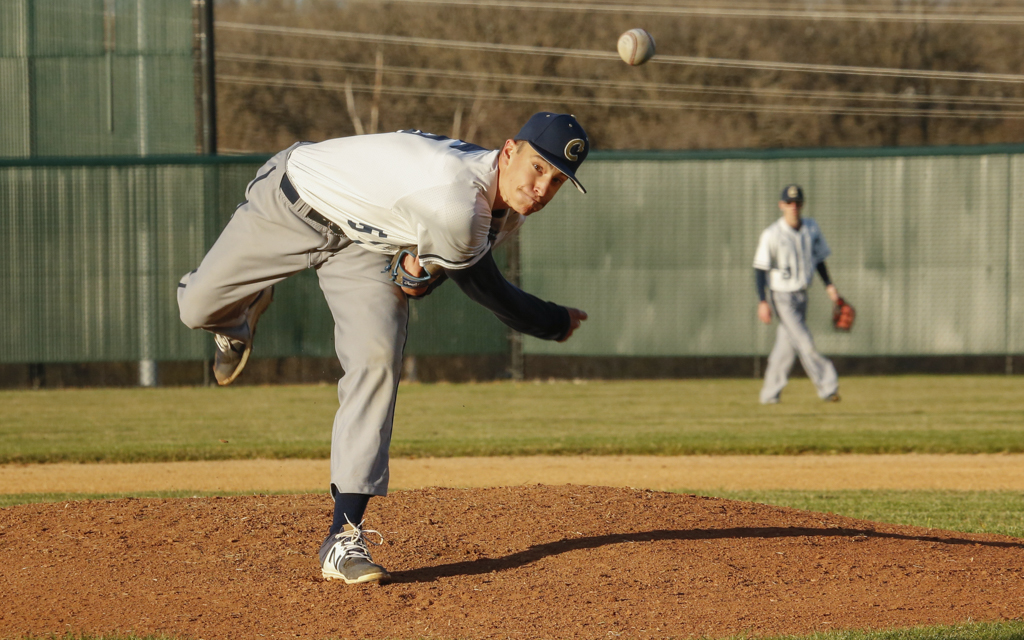 Chanhassen's Jacob Mrosko throws a first inning pitch against Wayzata. Despite Mrosko's eight strikeouts over seven hitless innings, the Storm would fall to the Trojans 5-3 in 10 innings. Photo by Jeff Lawler, SportsEngine

Wayzata went on the road to Chanhassen and picked up a wild 5-3 victory through clutch hitting in the 10th inning.

The Trojans (6-2, 3-0) went nine innings and 34 batters before Casey Stowe got the team’s first hit. After a sacrifice bunt and intentional walk, Keegan Nickel got the go-ahead base hit to score Stowe. The Trojans added three more runs to blow the game open.

The Storm (5-5, 4-0) came out in the top of the 10th and recorded two quick outs before loading the bases, which allowed Jack Nemetz to bring in two runs on a double to the wall. But that’s where the rally ended.

Wayzata’s bats were stifled throughout the game by Chanhassen junior pitcher Jacob Mrosko, who threw seven hitless innings that included eight strikeouts and three walks. Mrosko tallied one unearned run after a Trojan that reached on an error came around to score on a wild pitch. Brian Pitz tossed two more hitless frames in relief before the Trojans came alive in the 10th inning.

Wayzata’s pitching was nothing to scoff at, either. Connor Fletcher started the game and pitched three-plus innings, giving up one run and three walks. Ben Leuthner took it from there, tossing seven innings, allowing two runs on three hits and four walks. Leuthner delivered eight strikeouts.