Will Frisch and Drew Gilbert, both bound for Oregon State, led the Ponies from the mound and the plate. 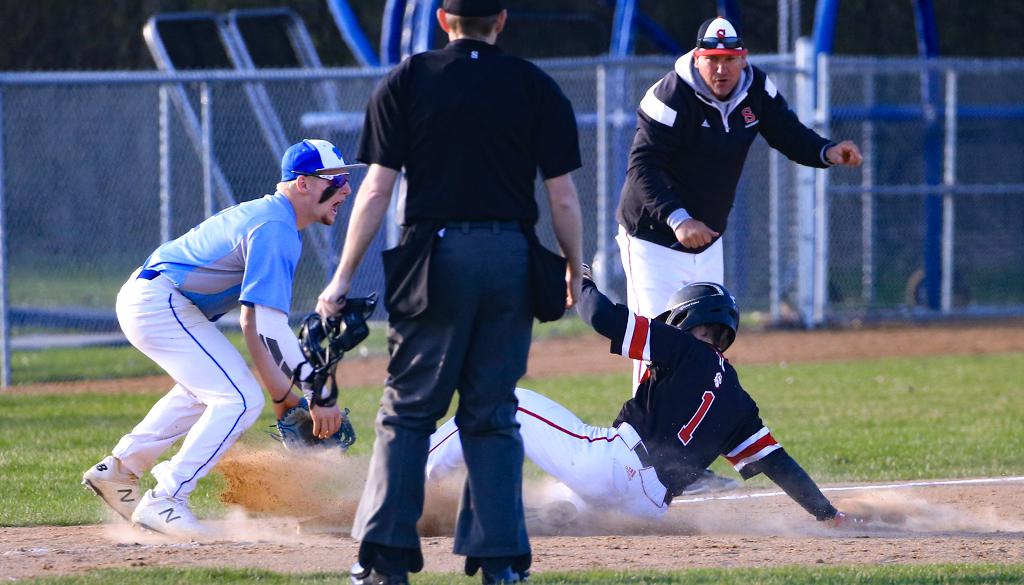 Drew Gilbert (1) slides into third base for a triple in the top of the seventh inning. Stillwater hung on for a 6-4 win over conference rival Woodbury on Friday. Photo by Cheryl Myers, SportsEngine

Stillwater features its own dynamic duo that’s worthy of being compared to Batman and Robin, or Captain America and Bucky Barnes.

Senior pitchers Will Frisch and Drew Gilbert, both Oregon State commits, showed just how competitive and supportive they are of each other on Friday at Woodbury High School, as Frisch took the mound as the starting pitcher, and Gilbert played the field and swung a heavy bat. 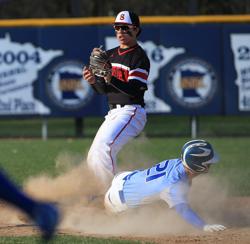 “We’ve been best friends since we were like 10,” Gilbert said of Frisch.

The tandem helped propel the Ponies, ranked No. 23 in the USA Today Super 25 national high school baseball rankings, to a 6-4 win over Suburban East Conference rival Woodbury in the first of their two regular-season matchups.

Things started slowly, as the Ponies (8-0, 7-0) went back-and-forth in a pitchers’ duel with the Royals’ Adam Mazur, the senior staff ace who is committed to South Dakota State.

The rival pitchers ran into little difficulty through the game’s first four innings, but things got interesting in the top of the fifth, when Mazur ran into trouble. In a sequence where he gave up four hits and a walk, including a RBI double from Gilbert and a RBI single from Frisch, Stillwater plated five runs.

Even with the defending Class 4A state champion Ponies holding a five-run lead late, Woodbury didn’t roll over in the bottom of the fifth. The Royals (7-1, 6-1) loaded the bases after Frisch walked two and hit a batter, then got some timely hitting from Luke Paulson and Riley Frisk. Paulson delivered a two-out RBI single, and Frisk hit a single, driving in two runs.

Stillwater coach Mike Parker cited the rivalry and competitiveness between the teams, which compete against each other in Class 4A, Section 4, in addition to being conference rivals.

“It’s always going to be an interesting, fun game (against Woodbury). We just knew they’d have some kind of run at us, and they put that four-spot up. And we kind of knew it was on,” Parker said.

Frisch finished with eight strikeouts, gave up three hits and had a 5-4 lead when he transitioned to first base after throwing five innings.

Gilbert, who didn’t pitch Friday, proved his value as an offensive weapon. He smacked a triple and walked once, in addition to hitting his RBI double. From the mound, Gilbert has recorded 34 strikeouts in 16 2/3 innings of work, while giving up just a lone unearned run, on the season.

“It’s not just about pitching. Anyway we can help our team, we do whatever we need to do to get a win for our team,” Gilbert said of Frisch and himself.

Frisch appreciates the value Gilbert adds to the team, regardless of whether he’s pitching or hitting.

“He’s a great two-way player. He’s going to college to play two way, and he can really swing a bat,” Frisch said.

On Woodbury’s bounce-back effort in the fifth inning, Parker seemed appreciative of being able to go back to Stillwater with the win, which keeps his team undefeated and gives them sole possession of first place in the league standings.

Regardless of what happens for Stillwater the rest of the season, Gilbert and Frisch have the luxury of being teammates in college. Frisch had committed to TCU, but changed his mind and decided to join his best friend as a Beaver beginning next fall.

“I didn’t necessarily try to recruit (Frisch) to Oregon State,” Gilbert said. “I wanted him to make the best decision for him and his family.” 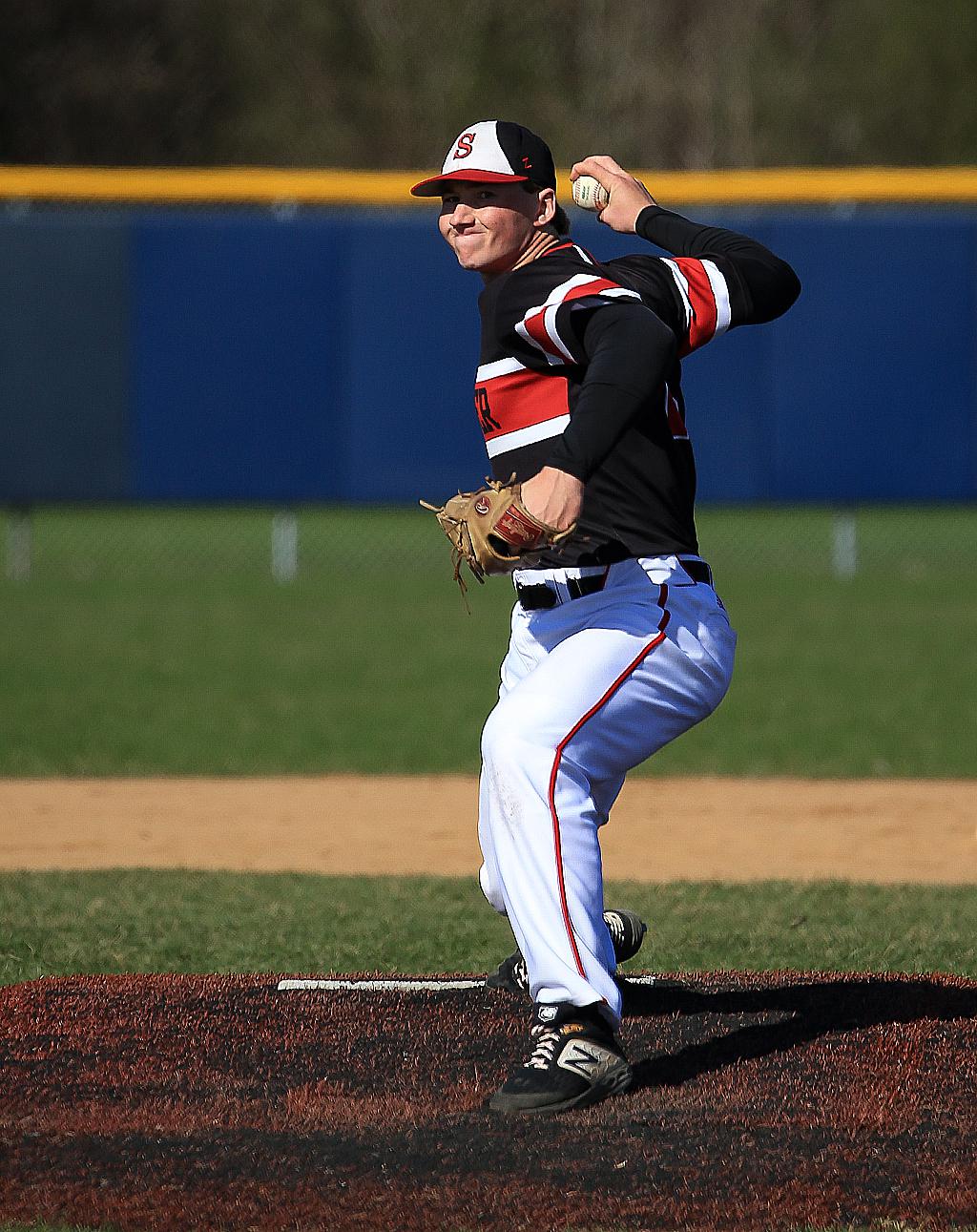 Stillwater's Will Frisch pitched five innings for the Ponies, notching eight strikeouts and giving up just three hits in a 6-4 win over the Royals. Photo by Cheryl Myers, SportsEngine

The right-handed Frisch threw five innings for the Ponies, who are ranked No. 23 in the USA today Super 25 national high school baseball rankings, before transitioning to first base to help his teammates close the victory. His first four innings from the mound were nearly flawless — surrendering just one hit — and he finished with eight strikeouts and gave up three hits total.

Gilbert, perhaps best known for his pitching, delivered from the plate Friday, recording a RBI double, a triple, and walked once for Stillwater (8-0, 7-0), the defending Class 4A state champion.

Down 5-0 entering the bottom of the fifth inning, the Royals (7-1, 6-1) rallied for four runs. Woodbury’s Luke Paulson delivered a two-out RBI single, and teammate Riley Frisk hit a single, driving in two runs.

Woodbury’s ace, senior Adam Mazur, struck out six, walked two and surrendered eight hits in the loss, which was the first Royals’ defeat of the season.

Stillwater and Woodbury, which are also Class 4A, Section 4 foes, are slated to meet again on May 17 in Stillwater. 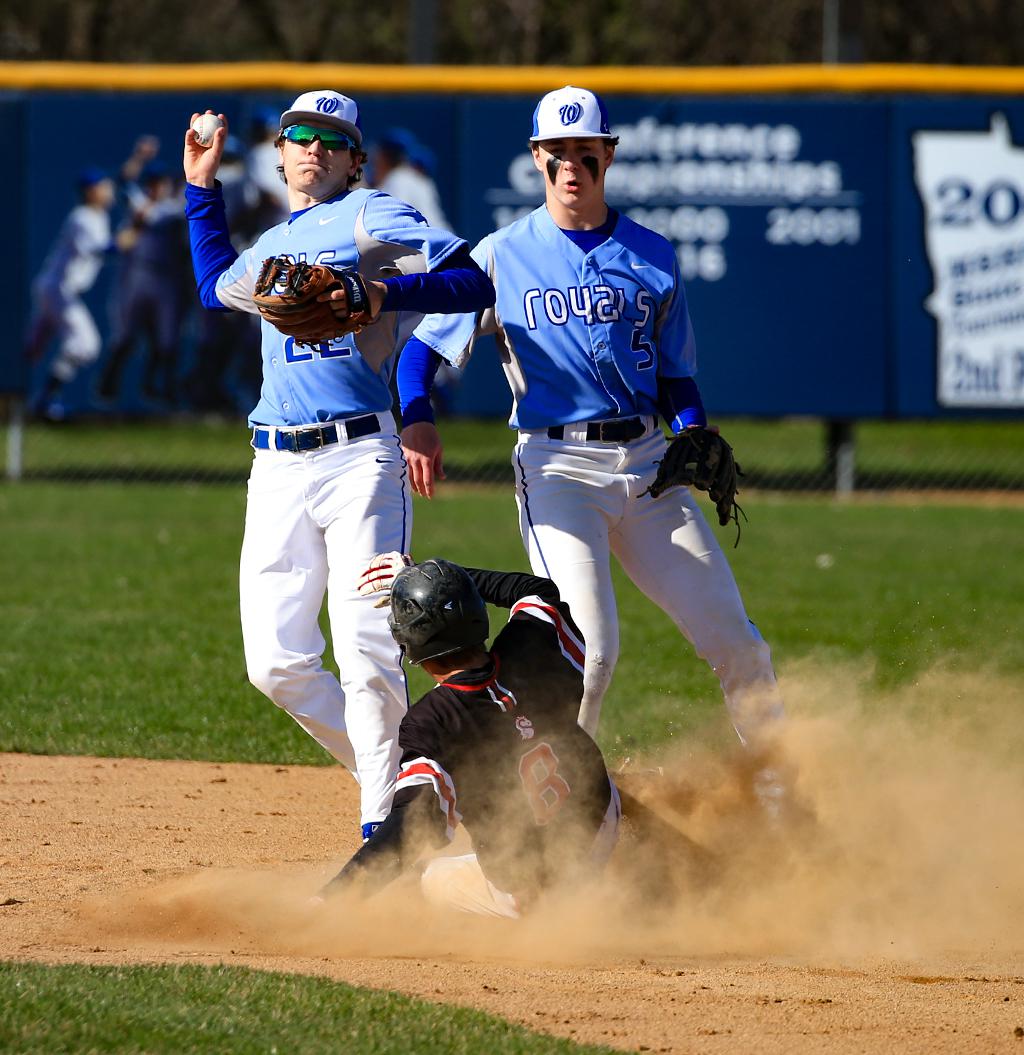 Quinn Krueger (22) turns a double play for the Royals putting an end to a Ponies scoring threat in the top of the third inning. Woodbury would give up five runs in the fifth inning and fall 6-4 to Stillwater. Photo by Cheryl Myers, SportsEngine