Jake McCabe scored the game-winner off a Brock Brumley single to right after the Redhawks gave up three runs to the Hilltoppers in the seventh inning. 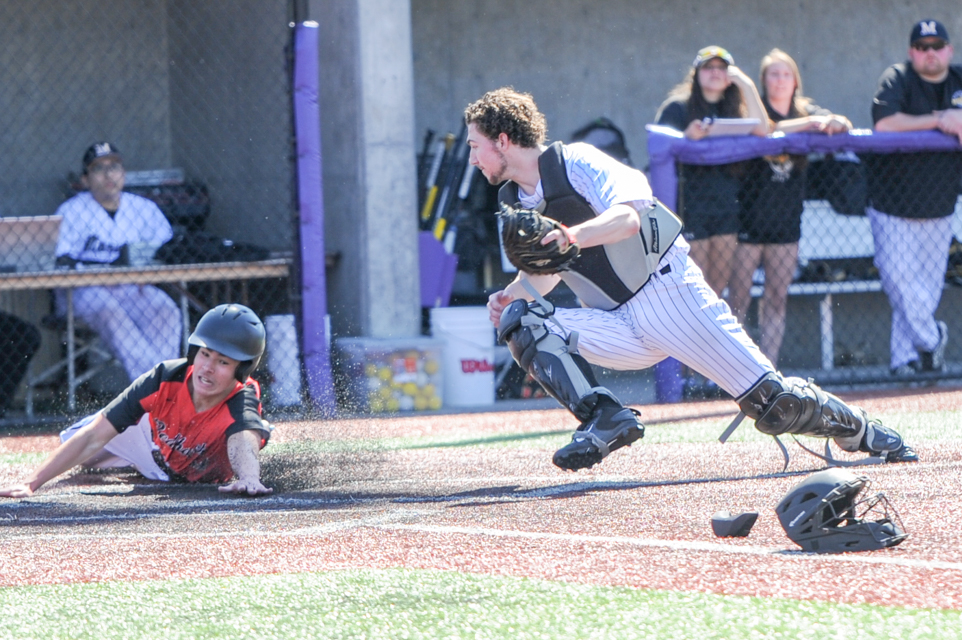 Minnehaha Academy’s Jake McCabe slides into home plate in the bottom of the seventh inning, scoring the winning run in a 5-4 victory at the University of Northwestern. Photo by Earl J. Ebensteiner, SportsEngine 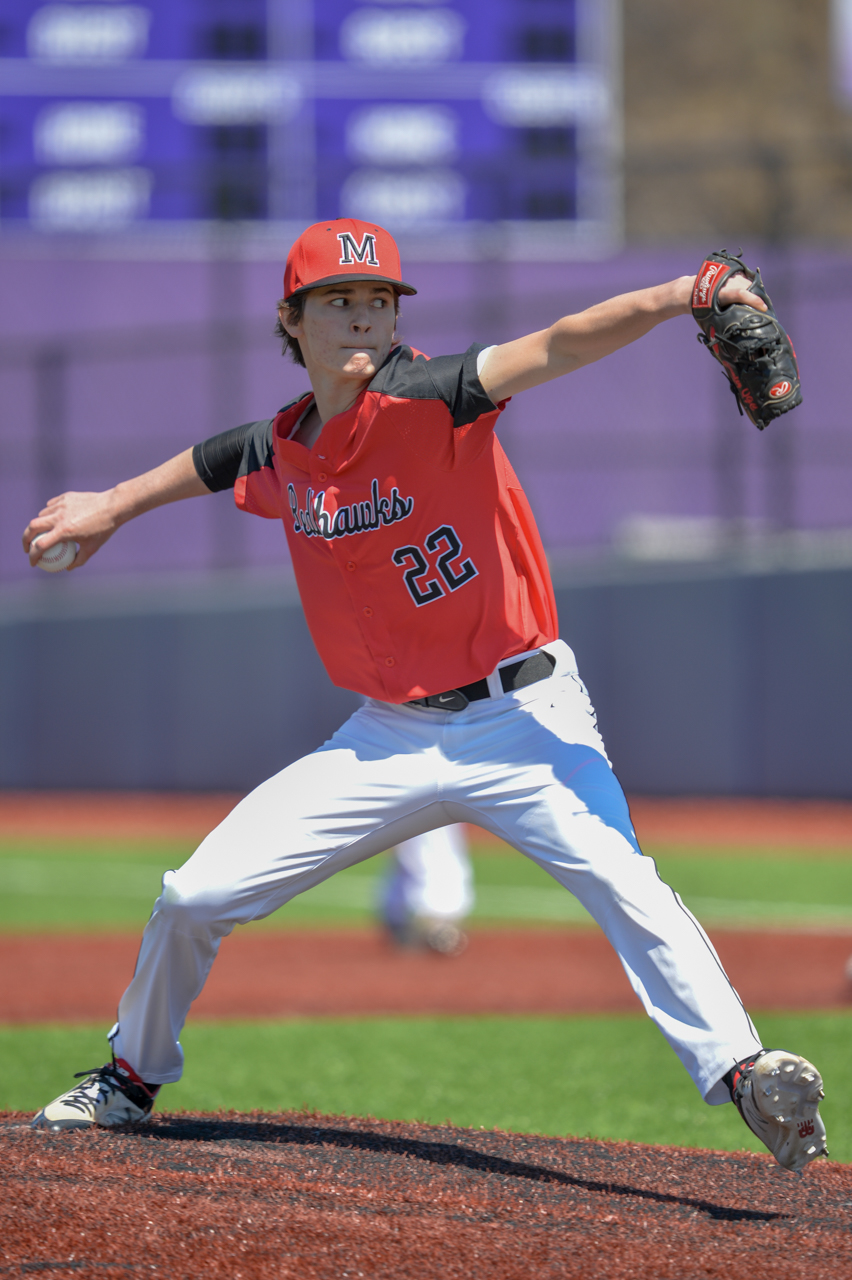 Minnehaha Academy's Brock Brumley had four strikeouts, no walks and batted in the winning run in the bottom of the seventh inning, sealing a Redhawks' 5-4 victory over Duluth Marshall. Photo by Earl J. Ebensteiner, SportsEngine

Brock Brumley and his Minnehaha Academy teammates knew they were in for a battle Saturday.

The Redhawks hosted Duluth Marshall at the University of Northwestern's Reynolds Field, and the Hilltoppers featured University of Missouri recruit Ben Pedersen on the mound. 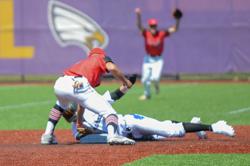 "Everybody knows him because he's the No. 3-ranked pitcher in the state," Brumley said of Pedersen. "But there's no pitcher who's too big, too tall, too strong or too good for us to beat. My job was to give my team a chance to win."

Brumley did his job to help Minnehaha Academy improve its record to 2-1 this season with a 5-4 victory over the Hilltoppers. He put together a strong start on the mound before collecting the game-winning hit in the bottom of the seventh; his last-second heroics were necessary after Marshall had tied the game in the top of the seventh to deny Brumley the win.

"I think he'll take the win with the game-winning RBI," Redhawks coach Scott Glenn said. "I would expect he's OK with that."

Brumley knew he would have to throw well to match Pederson, who struck out 10 and allowed just five hits in 5 2/3 innings. But Brumley, a senior right-hander, surrendered just five hits until tiring in the seventh.

The Hilltoppers (1-1) scored a run in the first on an RBI single by Peter Hansen, but after that Brumley threw scoreless ball until the seventh. He did not walk a batter; Brumley did not even reach a three-ball count until there were two outs in the fifth.

"I've never been an overpowering guy like Ben, so I have to keep mixing speeds to keep the hitters off-balance," Brumley said. "I always like my curve and slider; without those pitches, I wouldn't be able to do what I did today."

Minnehaha Academy tied the game with a two-out RBI double by Conor Johnson in the second, then appeared to break the game open in the sixth.

Pedersen's pitch count reached 107 pitches with a two-out walk in that frame, and after Hilltoppers reliever Matthew Erickson hit the only batter he faced, the Redhawks' Noah Dehne greeted reliever Tyler Johnson by slamming a three-run homer down the left-field line.

In the top of the seventh Brumley got one out before surrendering a double, a single and a run-scoring double by Kevin Snyder. "When we got that three-run lead we were really hyped up, but I was gassed," Brumley admitted.

Minnehaha Academy reliever Will Wamre issued two walks to force in a run, then after a strikeout gave up a walk that tied the game before leaving the bases loaded with a strikeout.

"The discussion for us is missed opportunities," Wicklund said. "We talk all the time about, when the call comes, can you answer it? In that instance, we didn't."

The bottom of the seventh also was a wild ride as back-to-back one-out singles followed by a passed ball pushed the game-winning run to third, but the lead baserunner was picked off third after straying too far away on a wild pitch.

That set the table for Brumley, a right-handed batter who singled to right to score Jake McCabe from second base on an extremely close play at the plate.

"I had played travel ball with [Johnson], so I knew he threw hard and had a decent curve," Brumley said. "So when he threw a first-pitch curve for a ball, I had a feeling a fastball was coming. I tried to take it the other way because of how hard he throws, and it found the barrel of the bat."

Glenn was pleased his team, which is pushing for its third Class 2A state title in four years, did not hang its heads after surrendering the three-run lead in the seventh.

"I thought our players battled," Glenn said. "That was our mind-set coming in to this game: We wanted to keep fighting. That's how we beat a really good team and a great pitcher."

And Wicklund felt Marshall can use the contest to get better as it pushes for a return to the state tournament. 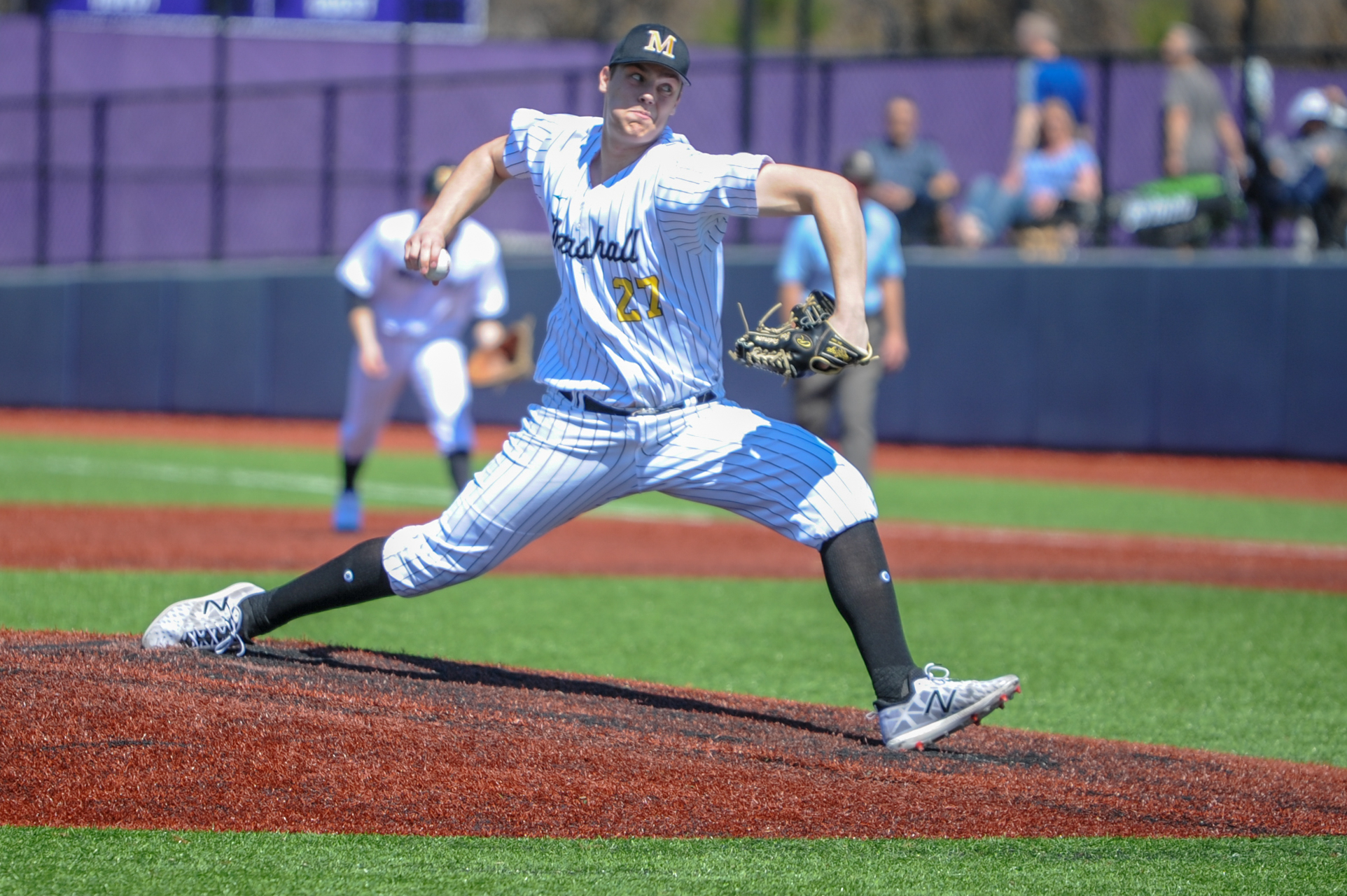 Dululth Marshall’s Ben Pedersen had 10 strikeouts in the first five innings but left the game having thrown more than 100 pitches, and the Hilltoppers couldn't hold the lead. Photo by Earl J. Ebensteiner, SportsEngine

Brock Brumley's two-out single in the bottom of the seventh inning scored Jake McCabe with the winning run to give Minnehaha Academy a 5-4 victory over Duluth Marshall at University of Northwestern Saturday.

Brumley's game-winning hit capped a wild finish that started with the Redhawks breaking a 1-1 tie with three runs in the bottom of the sixth, only to see the Hilltoppers retie the game with a three-run seventh.

Minnehaha Academy (2-1) broke a 1-1 tie when Noah Dehne smacked a three-run homer just inside the foul pole down the left-field line.

But Marshall (1-1) tied the game again with three runs in the top of the seventh thanks to a run-scoring single by Kevin Snyder and two bases-loaded walks.

That set the stage for the game-winning hit by Brumley, who also started the contest on the mound for the Redhawks. He finished with four strikeouts and no walks in 6 1/3 innings.

But the Hilltoppers' starter, Ben Pedersen, matched Brumley with 10 strikeouts and three walks before exiting after 5 2/3 because of a high pitch count.