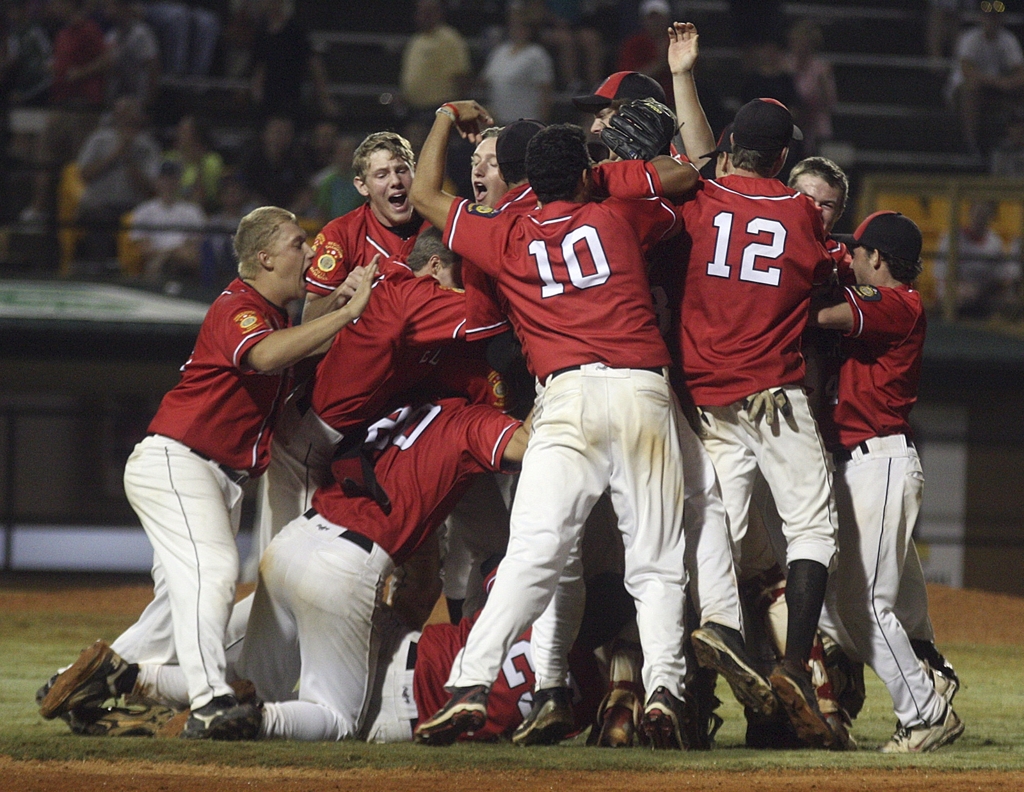 The lights shone brightly above Keeter Stadium and could be seen throughout Shelby, N.C. They remained on later than usual.

It was nearly 90 minutes after Eden Prairie's teen-age amateur team outlasted Tupelo, Miss., 5-4 in 13 innings in the finals of the American Legion World Series, and the Minnesotans were in no hurry to leave. The second-longest championship game in Legion history ended just before the strike of midnight Tuesday.

"I wanted to take it all in," said winning pitcher Lance Thonvold, whose uniform was soiled in red clay following the five-day journey of the World Series. "I don't even want to wash my uniform."

Thonvold threw six shutout innings in relief of Tyler Ruemmele, keeping fans riveted in their seats. Tupelo scored all four of its runs in the first inning.

"The fans in Shelby were unbelievable," said Eden Prairie first baseman Tyler Peterson, who scored the winning run in the top of the 13th and doubled in the tying run in the eighth. "The longer the game went, the louder and more excited the fans became."

Thonvold still had to close the door in the bottom of the 13th, and it didn't come without a little more tension. Tupelo used back-to-back one-out singles to put runners on first and second.

But on an 0-1 pitch to No. 9 hitter Kirk Roberts, Thonvold and shortstop Blake Schmit picked Cody Shrewsbury off second.

"I've been in a lot of pressure situations in my career," Thonvold said. "I've always been comfortable in those situations. You just can't let the atmosphere get to you."

Thonvold then got Roberts to ground out to third, touching off a celebration between the mound and first base. It was a long way back through the losers' bracket for Eden Prairie after a 14-3 loss to Midland, Mich., in the opening game.

"After losing the first game, I don't think anybody expected us to win it," said Schmit, who was selected as the player of the year. "We were still on the field soaking it up an hour and a half after the game."

Eden Prairie (43-8-1) finished by winning five consecutive games, including a 2-1 victory over Las Vegas earlier Tuesday in which Adam Bray pitched a six-hitter.

"It was a long way back, but we knew we could do it," Bray said. "We had done it before in previous tournaments."

It also didn't hurt to have last year's runner-up finish in the back of their minds. Eden Prairie lost twice to Midwest City, Okla., on the final day.

"It was pretty tough last year," said second baseman Tony Skjefte, who was named to the all-tournament team, along with Peterson, Schmit and center fielder David Belusky. "It's an accomplishment to finish second in the nation, but we still ended the season losing."

"People kept saying once we look back on it, we'll see what an accomplishment it was," Peterson said. "You could see, though, that everybody was disappointed. Losing is unacceptable."

Said Thonvold: "We had a little chip on our shoulder this year. We wanted a little revenge. Last year hit us in the heart."

That was all quickly forgotten late Tuesday night and early Wednesday morning when Eden Prairie became the fifth team in state history to win the American Legion World Series.

"It's an amazing feeling to win the national championship," Bray said. "It's a once-in-a-lifetime experience."