The stakes get bigger, the wins more dramatic.

No. 1-ranked Waconia scored three runs in the bottom of the seventh inning, capped by junior Robert Smith’s game-winning hit, for a wild 7-6 victory over Marshall in the Class 3A semifinals Friday at Siebert Field, keeping its dreams of a perfect season intact.

It was Waconia’s third consecutive walk-off win. This time it overcame a three-run Marshall rally in the top of the inning.

“This is all a blur,” Waconia coach Mark Grundhofer said. “Things like this aren’t supposed to happen. I’ll be replaying this one in my head for quite a while.”

The Wildcats (25-0) will play the winner of Alexandria and Hibbing for the state championship Monday at Target Field at 4 p.m. They have won four of their past five games by one run, the other by two, thanks to a two-run sixth inning.

“This is really amazing,” said Waconia senior Dillon Whittaker, who preceded Smith’s at-bat with a game-tying run-scoring single — his second hit — with one out. “How can anybody have a better season?”

Smith was hitless when he stepped into the batter’s box. He drove a pitch over the right fielder’s head to score pinch-runner Jaden Vanderhoff from second base with the winning run.

“We never give up,” Smith said. “This team keeps fighting the whole time.”

Jacob Hendricks started the uprising with a run-scoring single, scoring Justin Schultz. It was his third hit and second RBI. Schultz went 2-for-3, scored three runs and drove in another.

“Words can’t describe this,” Hendricks said. “It was crazy.”

Marshall (20-7) scored three runs with two outs in the top half of the inning to take a 6-4 lead. Junior Jacob Hess’ two-run triple down the right-field line capped the flurry. The Tigers tied it earlier in the inning when Oklahoma recruit Dylan Criquet-Danielson beat out a close play at first on an infield grounder, allowing Ryan VanMoer to score. VanMoer tripled with two outs.

“We needed a lot of things to go right, and it did,” Grundhofer said. “This is a coach’s dream.”

Robert Smith drove a pitch over the right fielder’s head to plate the winning run with one out in bottom of the seventh inning, giving the Wildcats a wild 7-6 victory over Marshall, and keeping their dreams of a perfect season intact.

The Wildcats (25-0) will play the winner of Alexandria and Hibbing for the state championship Monday at Target Field at 4 p.m.

Waconia scored three times in the inning after Marshall took a 6-4 lead with three runs in the top half of the frame.

The victory comes a day after the Wildcats got a bases-loaded walkoff single to defeat Mahtomedi 2-1 in nine innings. 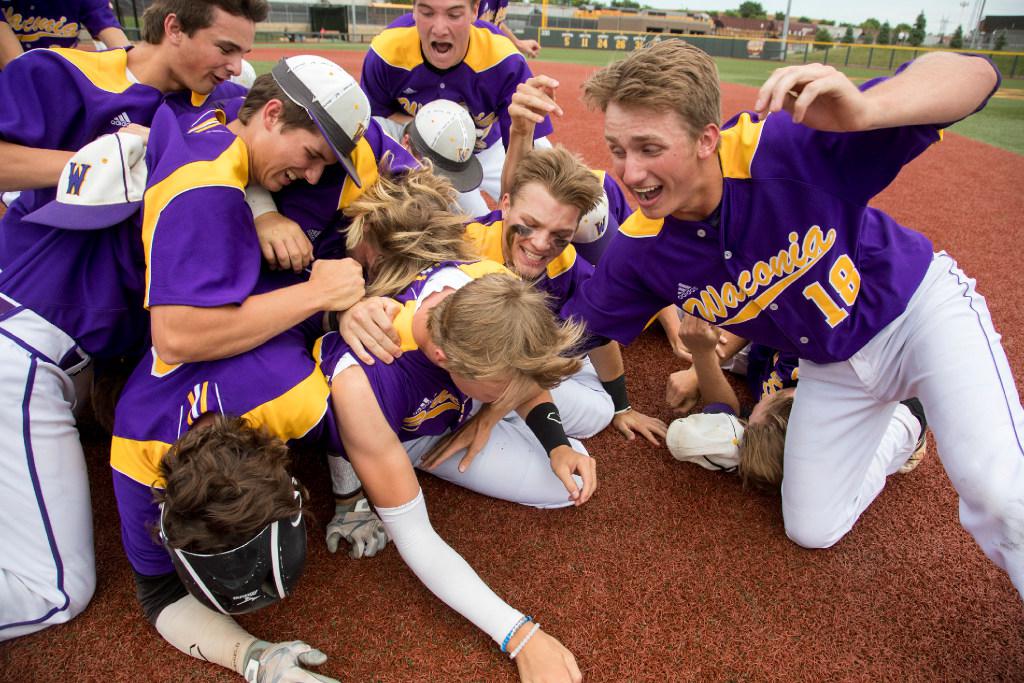