The junior pitcher didn’t bow, but he certainly deserved to.

Roskam threw a perfect game and struck out seven batters to propel top-seeded Chaska past seventh-seeded Waconia 4-0 in the Class 3A, Section 2 semifinals on Saturday. The victory sends the Hawks to the section championship game.

“I knew this kid had it in him the whole time,” senior catcher Carter Schmidt said.

Schmidt may have known Roskam had the talent to achieve such a rare feat, even if his battery mate wasn’t as confident earlier in the day.

“But sometimes, when you don’t feel the best, your mind takes over,” Baumann added.

Roskam’s mind must have been in control, as the pitcher quickly took the mound after every pitch and wasted no time in beginning his windup.

Baumann said Roskam’s pace on the mound could be a byproduct of his playing experience at catcher and first base.

The tempo kept the Hawks’ defense from losing focus as Chaska (20-3), No. 3 in the Class 3A rankings provided by Let's Play Baseball, finished the game without committing an error.

“It’s easy to play defense behind (pitchers) like that,” Baumann said.

Roskam joked that he has two speeds, slow and fast, and that the quick pace put him in a groove he did not want to shake.

“When I get in a rhythm, I like to keep going with what’s working,” Roskam said.

Waconia (17-6) attempted disrupt that rhythm as the Wildcats catcher mentioned the perfect game to Roskam as he stepped to the plate in the bottom of the sixth inning.

“I walked up to the plate and the catcher goes, ‘Do you know you’ve got a perfect game going?’” Roskam said. “And I’m like, ‘Why would you say that to me?’”

Senior first baseman Blake Tritch struggled to find a rhythm at the plate early in his first at-bat, falling behind and facing a 0-2 count. Tritch, however, quickly found it, driving a fastball over the left-center field wall to give Chaska a 2-0 lead in the bottom of the first.

“I was shocked I got a fastball in the situation,” Tritch said with a laugh, adding that he was expecting the next pitch would be a knee-buckling curveball from Waconia senior pitcher Jake Stevenson.

“(Stevenson) has got a good, tight curveball,” Tritch said. “And in that situation, you’ve got to jump on those fastballs as soon as you can.”

Roskam had all of his pitches working during the game, but Schmidt said his teammate’s perfect performance is the result of Roskam’s effort off the field.

“He works his (tail) off all the time,” Schmidt said. “It’s a really cool experience, and I’m glad I could share it with him.” 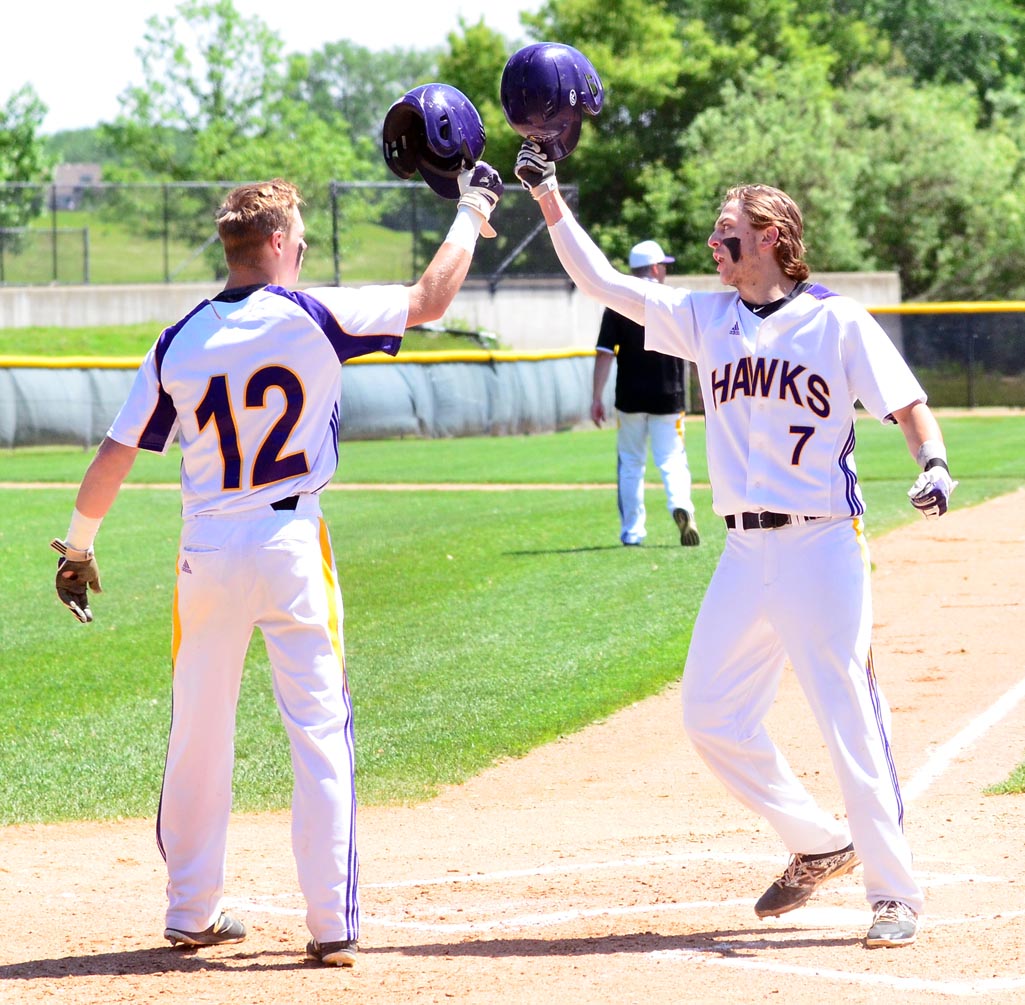 Chaska 1st Baseman Blake Tritch (7) is greeted at home by teammate Derek Annett (12) after his 2-run bomb in the bottom of the first. Photo by Nick Wosika

Facing an unfavorable 0-2 count in the bottom of the first inning, Tritch drove a fastball over the left-center field wall to give Hawks a 2-0 lead.

Senior pitcher Jake Stevenson went six innings and struck out eight, but took the luck loss on the mound for the Wildcats (17-6).

Senior catcher Carter Schmidt tripled and scored a run while sophomore infielder Reid Young had a run scored for Chaska (20-3), ranked No. 3 in Class 3A by Let's Play Baseball.

The Hawks advance to the section championship game on June 2, while Waconia plays the winner of the Minnetonka/Chanhassen at 5 p.m. on Saturday in the other semifinal.